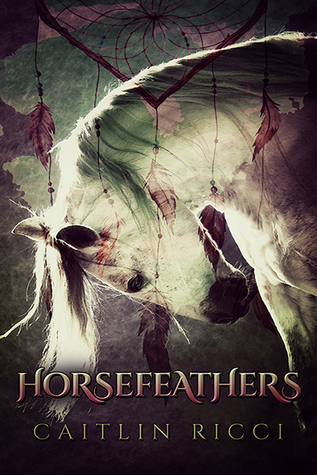 Cover: I’m not sure if I’d say this horse is gray, but my eyesight isn’t the best.

Description: Justin was sent to get a mare, and is helpless to explain to his unhappy boss why he came back with an untouchable gray stallion instead, but there’s just something about the horse that wouldn’t let him leave it behind.

Of course, because an angry boss and a horse they don’t need isn’t enough, the horse goes missing—leaving a strange man in his place, a man who speaks in riddles and seems more than a little crazy, but he’s also just as hard to refuse as the stallion…
Review: This short story would have worked so much better as a novel. The story would have deserved it.

I don’t know much about native american lore (or rather nothing), but it seemed to me like Horsefeathers was based on a beautiful, but sad tale. I can’t say much about it without spoilering, but I found it very interesting.

The beginning is really great, but everything developes too fast. Suddenly they’re kissing and when did this happen? And why?! And then it’s over. Although I gotta say the ending felt right. I was prepared for something very easy and unrealistic, but this doesn’t happen. It’s very open, though. Thinking back, it could have been chapter 1 of a novel… I wouldn’t say no, if it ever gets written into one.

Disclaimer: I got a free copy via NetGalley in exchange for an honest review. Thank you.