Review: Allaha of the Mountain by Aurora Lee Thornton 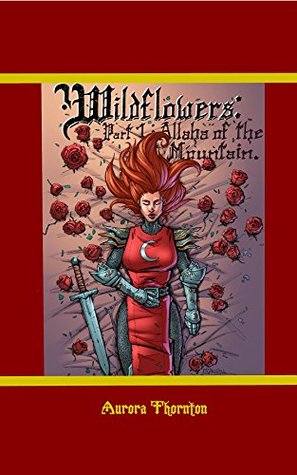 Cover: I love its medival touch.

Description: Allaha is a knight of the Order of Aisha, Fallen of the Mountain. She – like her fellows – is stoic and reserved, trained to fight against demons and their ilk. When she triggers a vision that kills a renown oracle, she is set on a quest to complete the prophecy.

She becomes the protector of those mentioned in the prophecy.

Tamara is a young woman of the Menori – a migrant people that travel in caravans. She is also a hamalakh, able to sense the emotions of others as well as sense falsehoods. She is sometimes wise beyond her years, but at other times her youth can cause her to draw incorrect conclusions.

Hibu, a sorcerer, is from the country of Jeongwon – a land where the nobility are worshipped as gods. He was the personal sorcerer of Prince Ji – a testament to the strength of his powers. He is ever curious and seeking new knowledge, questioning all the people they meet on their journey. He is joined by his demon familiar, Goric.

Karejakal was orphaned by the death of his entire clan – but his mastak powers gave him the ability to keep their spirits close. Still a child, Karej is a Tibu – a race of cat people that walk upright. Learning of his people from the spirits of his clan, the child has adopted Allaha as his mother.

Together, they travel the land of Magdra, seeking answers to a broken prophecy wherein they only know two things – that a darkness is coming, and that they are meant to stop it. All they need to discover now is how to do it.

Review: I loved books like this when I was younger.

And I thought I still do, but… somehow I don’t anymore. Which is sad, really. But I will try my best to give a good review anyway.

There are a lot of different characters in this story and I had some trouble because of this. It took way too long for me to be able to know that person a’s name is this and their background is that… (that may be a personal problem though!). I would have needed some kind of glossar to be honest.

Anyway, once I did know who is who I came to like the different characters – especially a certain demon. He’s by far the most interesting and funny one and I simply love his scenes. If there’s ever a side story with him as the MC, count me in!

According to goodreads you’re in for a 456 pages long ride. And at times… it felt even longer. I have to confess I skim read at times, because sometimes the story is a little bit slow and, well, boring.

But one thing is far from boring: The world-building itself. There are a lot of different cultures in this book and they are not your usual Tolkien-ones. But they are inspired by our world, I think.

Another thing that could (or should) be of interest to you is something the author told me about Allaha of the Mountain: There are a lot of LGBT characters in this story. A few you get to know now, but later on there will be an aro ace character! There are hints to them in this book, but I won’t spoiler you.

I started this review along the lines of when I was younger… and I truly think I would have loved it when I was younger. But somehow… it was too much and not enough for me now. Maybe I just can’t concentrate on fantasy this long anymore, who knows?