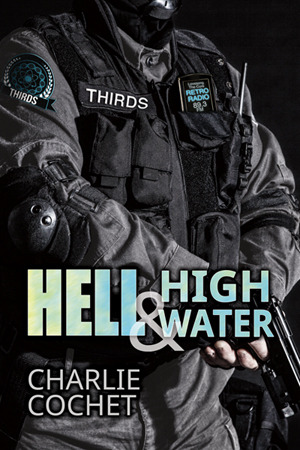 Cover: I love how non-sexualized it is and how dangerous it looks.

Description: When homicide detective Dexter J. Daley’s testimony helps send his partner away for murder, the consequences—and the media frenzy—aren’t far behind. He soon finds himself sans boyfriend, sans friends, and, after an unpleasant encounter in a parking garage after the trial, he’s lucky he doesn’t find himself sans teeth. Dex fears he’ll get transferred from the Human Police Force’s Sixth Precinct, or worse, get dismissed. Instead, his adoptive father—a sergeant at the Therian-Human Intelligence Recon Defense Squadron otherwise known as the THIRDS—pulls a few strings, and Dex gets recruited as a Defense Agent.

Review: This is a great book, but it didn’t show its full potential.

May I start with saying how well thought-through this world is? There weren’t any things where I went like “But wait, how does this…?” Perfect world-building. The reader learns about history without it sounding boring or like fact dropping. There are politics and different opinions. Plus there are no magical grow-with-you-while-shifting-clothes.

It was refreshing how there was no big talk about Dex being not straight – it was simply accepted. Speaking of Dex: He made me laugh so much. Such a smart mouth. And he really were. Great case of show don’t tell.

I enjoyed the team dynamics (and there were dynamics even between side characters, who often get forgotten in stories) and the romance as well. Again, I had fun reading about them.

Special points for no assholish boyfriend. Of course what he did wasn’t great, but it was realistic, so…

Sounds perfect, right? It nearly was, but only nearly. The mystery part was… well. Seriously, it was very obvious what was happening and that’s sad, because the other things were so great. Plus Hell & high water ends with a cliffhanger – and if you know me, you know I feel like that’s kinda blackmailing the reader to buy the next. I know a lot of authors do that (maybe even have orders to end a book like that), but still. No big deal, but it still annoys me a little.