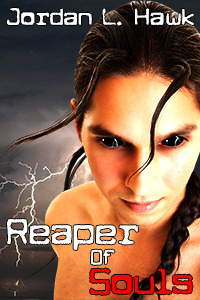 Description: When an incubus murders the powerful ally of an anti-paranormal senator, it’s up to hotshot Federal agent John Starkweather to catch the demon before it can kill again. Fortunately, he has backup, in the form of his boyfriend Caleb, a telekinetic possessed by the vampire spirit Gray.

As the political pressure mounts and bodies pile up, John discovers an old enemy protecting the incubus: the Fist of God, a group that believes all paranormals are evil. But why would the Fist work with a demon? And why would they let it kill one of their own allies?

John and Caleb need to find out fast. Because the incubus lurks at the intersection of love and longing, and it’s willing to turn their deepest desires against them.

Review: I didn’t enjoy this part as much as the others, but I still liked it.

I think Gray belongs to my top ten book characters, I simply can’t get enough of him. But I’ve come to like Caleb more and more, especially because he begins to think and reflect more.

Sadly the love between John and Caleb (and Gray?) feels a little bit forced and way too fast. But I’m a sucker for slow-building romance, so…

Anyway, I found this case’s idea very interesting, but the case itself wasn’t that great. Still good, but not as good as it could have been. It is realistic, though. If there were such things as incubi and the like (maybe there are?).