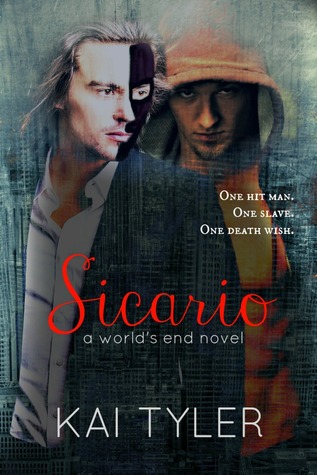 Cover: Phantom of the opera, anyone?

Description: One hit man.
One slave.
One death wish.

Sold by his parents and bred in a lab, Lexan Cesare is trained for one purpose—to execute his boss’s orders. In the mafia life, loyalty is everything. Emotions have no place and he never questions the rights or wrongs of the decisions that send him to terminate lives again and again.

Until one assignment draws emotions he’s never felt before and makes him question his true loyalties.

Enzo Mattia has been ripped apart from his family and everything he knows and sold into slavery. He swears to mete revenge on all who have wronged him.
First he has to escape from his new owner, Lexan, a man who captivates him and makes him want to act on impulses he’s suppressed for a long time. Impulses that can lead to death.

But the world is in flux and loyalties shift at the speed of a bullet. Betrayal abounds and falling in love is just a death wish.

Review: I’ve got mixed feelings about this one.

The sex scenes were really well done and I liked how not set in your usual dom/sub limitations the characters were. So 5 stars for those on their own.

Sadly (in this case) there was plot, too. The words weren’t really flowing and the story felt kinda rushed – especially towards the end. Everything seemed too easy and… unfinished maybe? Like a draft. Also I was confused why Enzo doesn’t recognize Lexan when the meet again.

I expected something a little like In the company of shadows (come on, the parallels are there!), but it is really different. I can’t tell you much about the world building in this series, because I have not read the first part. In the second part there isn’t much (which is not needed if it’s in the first one, so…).