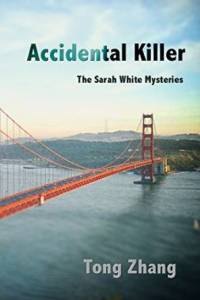 Description: Connected by murders, a computer hacker, an eccentric nano technology researcher, an illegal Chinese medicine dealer, an African marathon runner and a religious fanatic, all came to Sarah’s life. Can she escape death and lead the police to the killer? Accidental Killer is the first book in the Sarah White Mysteries series. It takes place in the San Francisco Bay Area.

Review: Such a slow beginning! And to be honest that doesn’t really change. I wasn’t exactly bored, but while reading I had the feeling there were more character introductions and talks about their pasts than mystery. At least most characters were greatly introduced. I’m still not sure what is going on with Scotty (who is he exactly? Why is he living there?) and the girl doesn’t have a name apparently. The murder(s) didn’t get as much attention as I would have liked.

Sometimes the writing was a little bit… hm… stiff isn’t the right word. Strange. Let’s call it strange. I’m no native speaker but sometimes I had the feeling is was strangely written maybe? And I don’t like it if nearly each sentence is like Mrs Dalton did this and then Mrs. Dalton did that… why not use sometimes other names/descriptions? Like the older woman or the landlord.

But let’s move on to the main character. I was a little bit annoyed at Sarah’s Mary Sue-ness. Everyone loves/wants her, sometimes instantly! and she can’t do anything wrong. I always think of these characters as very boring. I didn’t understand why or how she is so involved in finding the murder. Of course it’s one of her friends, but that doesn’t mean the FBI and her work hand in hand? What is her qualification? Why is she so much more successful than the police?

Overall this book is a little bit too much (too many different themes for me) and at the same time not enough.

Disclaimer: The author provided me with a free copy in exchange for an honest review. Thank you.