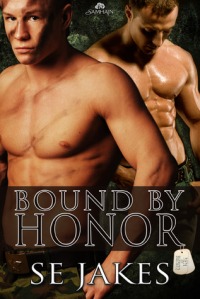 Description: One year ago on a mission gone wrong, Tanner James failed to save the life of Jesse, his Army Ranger teammate. Before dying in that South American jungle, Jesse extracted a promise that won’t let Tanner rest until it’s fulfilled—no matter what it costs him.

After a rough start, Damon realizes that the tough soldier, despite his protests, aches for someone to take control. And Tanner senses a hesitance, an insecurity in Damon that makes him wonder if he’s simply a placeholder for Jesse, or if their tentative connection could grow into something more.

For Jesse’s sake, they agree to try one weekend together. Then duty calls, and a series of attacks that have been happening near the club hits too close to home, making both men wonder if giving their hearts is a maneuver fraught with too much risk…

Cover: Nothing special but not bad

Review: I am a big fan of SE Jake’s Hell or High Water Series, so I had really great expectations for this one. Maybe a little too great. Bound by Honor was written before that series and you notice it. The writing’s not that flowing – although it gets somehow better at the end? – and there were some editing mistakes like a false name.

But if you can overlook those issues you’re in for an interesting and hot ride. I liked how subspace was handled (especially the sub drop part of the story) and how the dom’s side is featured as well. They have needs and make mistakes, too, you know?

Damon and Tanner dance around each other for months, which I really liked. If you are learning something new about yourself, you don’t just accept it.

I’ll read the other parts too and not only because it’s SE Jake’s work. This series promises to get good.

I want to add trigger warnings: Expect rape mentioning and a character gets slipped drugs.

You can buy it here.