Review: One Bullet by Casey Wolfe 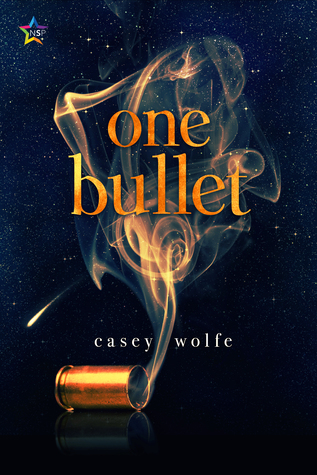 Cover: I love its artsy feeling.

Description: When Ethan Brant was shot, he found himself dealing with severe PTSD and unable to do his job as a police officer any longer. With the aid of Detective Shawn Greyson, the man who saved his life, Ethan not only finds himself again but discovers love as well.

Shawn’s life growing up was less than ideal, however, he overcame that to become who he is today. That doesn’t mean he isn’t missing something in his life. What Shawn hadn’t realized, upon first meeting, was that Ethan could give him all that and more.

One bullet changed both their lives.

I enjoyed Ethan and Shawn’s story, but especially Ethan’s PTSD and the way he works to overcome it were of great interest of me. This book manages to be a fluffy read without romanticizing PTSD or mental illnesses in general. Yay!

But its shortness does not work in its favour. A lot of important and interesting plot points are glossed over. I didn’t get too invested in their relationship as well, because it develops rather quickly – and if you know me you know I need a realistic development to root for a pairing.

One Bullet is still a nice one time read, maybe even more because you’ll read it real quick.

The portrayed therapy is a huge bonus point to me, because therapy sessions aren’t that often portrayed in books. Plus maybe there are readers out there who learn something from it and they can try it themselves? The musical approach could be of benefit for quite a lot of people, not only those having PTSD.