Review: Every Day by David Leviathan 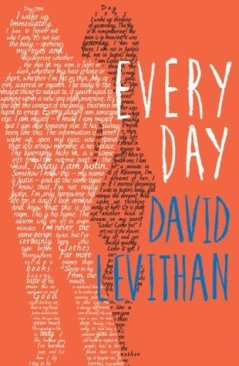 Cover: I like the greyish one more, but the ‘drawing’ of characters through words is a great idea.

This is one of the best books I’ve ever read. ’nuff said.

But you probably want to know why and I’m willing – so very, very willing – to explain why. Although I’ll rather fangirl about it than explain…

I haven’t read about an idea like this one before. A character waking up in a different body every day? Very original. But David Leviathan doesn’t stop there. We get to read about A waking up as a boy, as a girl, as a PoC, white, straight, gay, mentally ill,… – you’ll get the picture. And he isn’t doing it because it’s trendy to have, say, a mental illness as a cute character quirk. It’s heartbreaking, but in a good way. This book is the reason why I started doing my Quotes to get lost in series (you can watch the first part if you like to). If I hadn’t as many unread books as I have, I would re-read it right now.

I liked Rhiannon’s approach to insta-love very much. It’s the first time I’ve read that in a book and I love her for it. You can’t fall in love with someone you’ve know 9 days, but in a lot of books it works that way. Not here. Well kinda. But that’s the only critique I have and it’s more like half of a negative point.

I can’t wait to read more by David Leviathan!