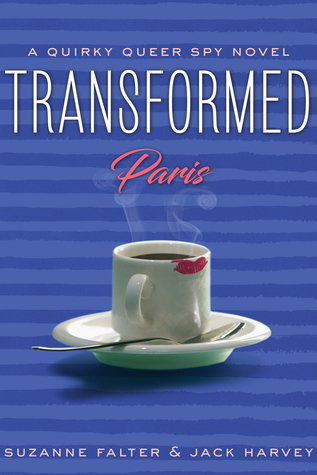 Cover: The new covers are way more fitting than the old ones.

Description: Transman spy Charley MacElroy travels to Paris to help French authorities break up a Neo Nazi plot to scatter dirty bombs throughout the city. His older lover Electra comes along to study French, but she soon discovers Dickie Borque, an sinister British aristocrat with lavender hair, may be behind the plot. Charley, however, is not so sure.

Meanwhile, she and Charley begin having love troubles when he suggests opening up their relationship to suit his pansexual desires. After discovering that he may have been fooling around with his attractive new male assistant, Electra moves out in a huff. Soon Charley is wandering the quays alone, trying to find the dirty bombs while wistfully longing for his love.

Electra enlists the help of Dickie’s feisty eighty-something milliner, Odile, to break up the plot. But then suddenly, Electra disappears. Now Charley must search frantically for both the bombs and Electra amidst the cafes, conversation, and the gleaming, rainy streets of Paris in winter.

First I have to say that there have been some changes going on in this series: The covers have been redone (great decision) and the title has been changed. Although it seems to not be set in stone? Because the title varies on NetGalley and Goodreads. May cause confusion. But on to the book itself.

It reminded me a little of Transformed: San Francisco to be honest. You probably shouldn’t read those two without some time in between.

But the characters are way better, the main ones as well as the side characters. I especially like Odile and I wouldn’t say no to reading more about her.

But I gotta say, there was something which I didn’t like. At all. There is a scene in this book in which it is said, that Charley needs different lovers because of being pan. Being pansexual doesn’t mean you may want more than one lover. It’s because he is polyam*. Just a small thing, but yeah.

Anyway, if you like light lecture and/or want to read more about LGBT characters without their queerness being the centre of the book, this is a series you should check out.