Review: Gays of Our Lives by Kris Ripper 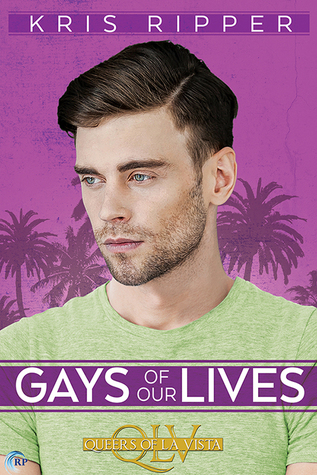 Description: Emerson Robinette only leaves his apartment to get laid and go to work. Having MS—and trying to pretend he doesn’t—makes everything more complicated, especially his fantasies of coming on strong and holding a guy down. Finding a partner who’ll explore that with him isn’t Emerson’s idea of a realistic goal.

Until a chance meeting with a hipster on a bus makes him reconsider. Obie is happy, open-hearted, and warm; what’s more, he gets his kicks being physically dominated, spanked, and teased until he’s begging. It would be perfect, except for one thing: Emerson isn’t made for happiness, and he doesn’t see how a guy like Obie would settle for a cynic like him.

But as far as Obie’s concerned, the only thing keeping them apart is Emerson. Can Emerson handle a boyfriend who’s more invested in his future than he is? Emerson’s barely convinced he has a future. But when Obie’s smiling at him, anything seems possible.

Review: I’ve read this book in one day. I would have read it in one sitting if there wasn’t this thing called responsibilities.

Being chronically ill myself I was very eager to read a book about a chronically ill character. Kris Ripper doesn’t disappoint. I don’t have a lot of knowledge about MS (friend’s brother’s wife has MS), but I felt like it was well researched.

Emerson is rather bitter about his life, which I hugely enjoyed, because not every person has rainbows shooting out of their ass. I loved how real he is. He has bad days and those don’t get glossed over. The reader experiences his bad days with him and gets to feel his frustration. I liked his development as well.

I expected more sex scenes, to be honest. But while reading, I didn’t miss them. There are some, but the focus lies on everyday interactions between not only the MCs but quite a few side characters as well.

And can I just say, that love is not the magically cure for everything in this book?