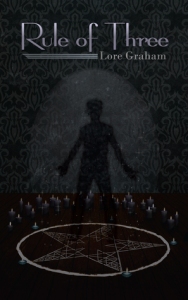 Description: Provoked by yet another argument with his rival, Ian sets out to prove he’s capable of serious black magic by summoning a demon. Instead of a hulking, red-skinned brute, however, he winds up with the handsome incubus Alistair. Now, Ian must cope with a wily and seductive matchmaker who insists his rival may be more than just an adversary.

Review: I expected so much more from this book. Instead I got two sex scenes, which didn’t do it for me. But there still are a few great things about Rule of Three. First it’s about magic today. Our main character – who isn’t the most intelligent mage there is, I’d say – for example uses the internet to get the pronunciations right. Another main character is genderqueer (ze uses – obviously – ze/zir, but sadly there were a lot of mistakes where he/his was used). And the third main character? Alistair could have been so much more. I really liked his character and I would have loved to get to know more about him.

I can’t tell you much about the plot, because there isn’t much plot to begin with. The relationships seemed to me forced. In my eyes everything would have worked better, if this book would have been longer – more character introduction, more about this world, just… more.

Disclaimer: I was provided through NetGalley with a free copy in exchange for an honest review. Thank you.