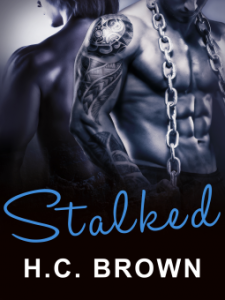 Description: Who’s more dangerous – a stripper, an assassin, or a serial killer?

The Stripper Ripper is stalking the streets of New York City, preying on male strippers, and the press is making mincemeat of a helpless police force.

In desperation, the police refer the serial killer’s case to the Slayers, a team of enhanced, undercover super soldiers. The commander of the Slayers puts his team on the streets to watch over the Ripper’s favorite targets.

One of these targets is Micah, a twink stripper and a desirable sub. Micah’s baby sitter is one of the newest members of the Slayers, Sorren, as cold-blooded an assassin as they come, and the last person you’d expect to harbor feelings for his charge.

True to form, Sorren is as surprised as anyone at his new infatuation, but Micah is hiding something. Will Micah learn to trust his protector, or is he destined to be the next victim on the Stripper Ripper’s list?

Cover: Best part of this book is the cover, which is gorgeous.

Review: I’ve read the description above on NetGalley and it sounded interesting as I’ve got a thing for stories about serial killers. After a few pages I was truly confused, so many characters who didn’t get introduced, alphas, bounds and nanos were mentioned and used for explanations. I checked goodreads and learned that Stalked is the second installment of a series. Okay then. So the confusion I’ve felt hasn’t influenced the following review.

I struggled to read as far as I did before I filed this book under dnf. The writing style wasn’t enjoyable to me all, instead it was rather exhausting to read. On top of that I didn’t feel the characters. I haven’t got the feeling like I really got to know them and what I did learn about them, was rather cliched. You know the ‘I never feel anything for anyone, don’t even care about them but then there is you and boom! Feelings’ -trope? Both main characters suffer from this. It’s bad for me if there is one (mostly because it’s so often badly done and used if there is no chemistry between the characters), but both of them? Ugh.

But I could have suffered through this, if that had been all. The ‘bdsm’ part of this novel was what gave me the rest. Micah watches how his friend get murdered by the ripper, is saved in the last second before he gets murdered too… and that makes him go into subspace?! Excuse me? I had to put it down after that. I’m afraid how the actual sex scenes are going to be, with Sorren ‘I’m a dom and you’re a sub, so are there objections that I wash you’ and Micah ‘I saw a murder and am now in subspace while having panic attacks’.

I was provided by NetGalley with a free copy in exchange for an honest review. Thank you.

If you are interested you can buy or sample it here after the 24th of september.