Review: The shepherd and the solicitor by Bonnie Dee & Summer Devon 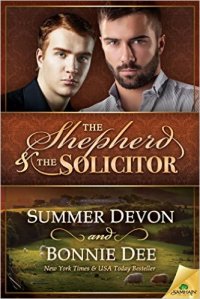 Description: When a storm is brewing, taking shelter could be the most dangerous move of all.

One careless, public sign of affection cost Daniel Pierce’s lover his life at the hands of a hate-filled mob. Grief-stricken, Daniel retreated from society to a sheep farm in the wilds of the north. Years later, Gregory Tobin erupts into his solitary life.

With lambing season in full swing, Daniel grudgingly admits he could use an extra hand. Through a long, exhausting night, they parry back and forth as Tobin probes closer and closer to the truth. And something beyond casual attraction simmers between them.

They come together in a crash of desire, but ultimately Daniel must overcome the terrors of the past to reconcile the man he was with the man he’s becoming—a man capable of loving again.

Warning: Many sexy encounters on a sheep farm—NO, not like THAT!—between two adult males with temperaments as different as night and day.

Review: If I had to summarize this book, I wouldn’t hesitate one second: UST. The main characters’ chemistry is palpable and you never know if Daniel will give in to his desires or if his fear is just too great to do so. You really can feel and understand his struggles.

While there isn’t happening much, I found myself intrigued by Daniel’s farmer’s life – just like Tobin. This story is just really charming and makes a nice afternoon read.

The shepherd and the solicitor will be published on september 29th 2015. You can preorder it.

I got it as an ARC via NetGalley in exchange for an honest review. Thank you.